The crystal singing bowl – a new instrument of the New Earth

Diverted from its original function of a crucible in the laboratory by the Americans in the 1990s, the crystal singing bowl has been changing its forms and models according to new technological possibilities.From quartz powder (99,995%) heated to 3700 °C, poured into a form, centrifuged and then sanded, emerges a crucible destined for laboratory technicians for their chemical experiments. Such a crucible is resistant to extremely high temperature as well as large variations of pH. This basic model called “white frost” enables to recognise the notes of chromatic base and 3 types of tones classified as: high, medium, and low pitch.

These tones depend on the diameter, the height and the thickness of a bowl. 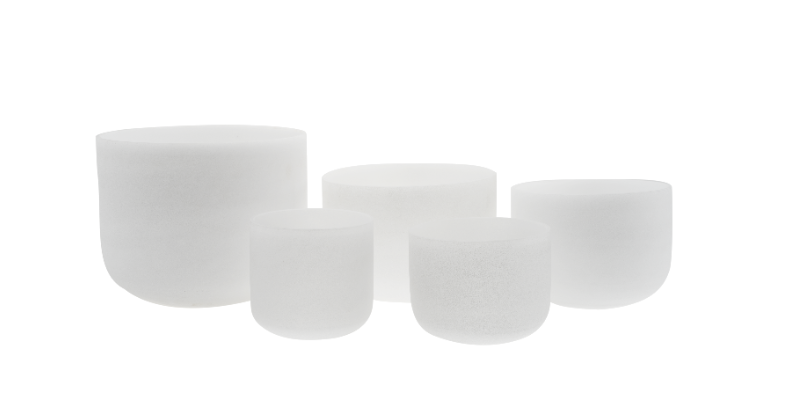 It is worth highlighting that synthetic quartz crucibles are manufactured and commercialised. Of course, vibrations emitted by quartz vary depending on whether it is natural or synthetic.

Some even go so far as to retrieve crucibles used by laboratory technicians and resell them second-hand on commercial sites at extremely competitive prices. Hence, be careful!

Clear bowls are polished and made transparent to be more sustainable (sustain in this case means capability of an instrument to preserve and maintain a sound of one note without replaying it). Vibratory frequency of this vessel is subtler and more delicate. 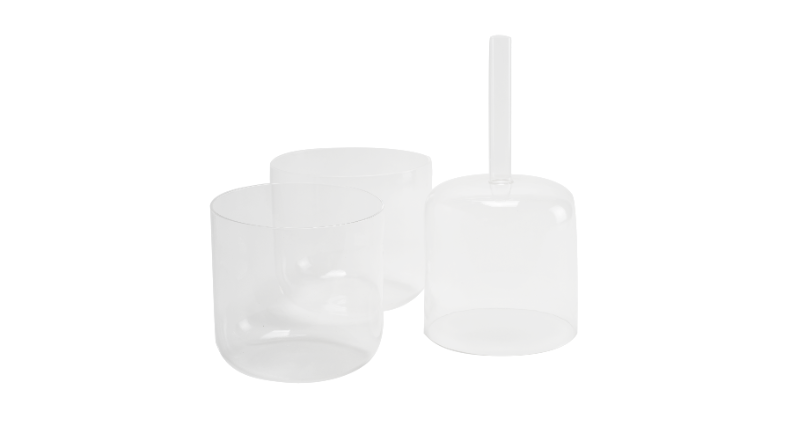 This model was followed in production by the bowl equipped with a handle which is called “therapeutic”. It may be used with great dexterity and precision. It is possible to find therapeutic frosty bowls, however it is rare.

These days there are also crystal bowls having the immaculate whiteness of “white frost” and the sound purity of the transparent one. Such a hybrid, through the process of double heating, revolutionises vibratory instruments.

Also, this revolution makes progress, for other innovations will undoubtedly refine the quality of the basic model.

There is also an issue of encoding in quartz particular desired characteristics.

Coloured bowls are, in this regard, the best example of the process. The colour encoded into a bowl is to correspond with a given chakra.

Such singing bowls affect us in accordance with specific qualities of their colour, as chromotherapy proves. Each colour has its own qualities and frequency.

Some bowls are coloured with titanium gas which makes them beautifully bright and shimmering. Thus, we touch upon a colour code.

It is important to highlight that mixing gems does not work, as certain producers and traders allege. For example, blending quartz and amethyst in high temperature do not preserve the purple hue of the latter. The colour becomes yellow – green in the fusion at a high temperature, since it changes its crystal structure into citrine. If one continues heating, the colour disappears completely. Furthermore, some producers claim to succeed in adding 5% of gems to quartz, which still needs verification. What we know for sure nowadays is that in actual fact the bowls are recoloured by chromatophores which create colour due to their electronic structure. Alternatively, we can add rare earth containing concentrate of metals enabling colouring adapted for industry.

Crystal and metal bowls are created in the process of electrolysis. They combine vibratory qualities of the two realms, thus incredibly broadening our sensitivity. Every type of metal has the characteristics which resonate with quartz.

Crystal bowls coloured by nanoparticles? Maybe you have dreamt of that: colourful crystal bowls! In fact, there are many ways of colouring crystal vessel. But do you know that nowadays technology enables to use nanoparticles to do that?

Each colouring method, colouring in part (the surface) or in full, offers a spectrum of various hues. The effects depend on a given method: transparent irisation or dimmed colours, lustrous or frosted. Each of the methods has its pluses and minuses.

A great advantage of crystal bowls coloured with nanoparticles is the guarantee that the colour will not change, in use or with the passing of time. What is more, we get a spectral effect which seems to be in 3D. The range of nuances is infinite!

In the nano universe, we are at a scale of a billionth of a metre. The nanometre is a measure used to define dimensions at an atomic scale. From the dimensional point of view, nanoparticles are between macroscopic matter and atomic or molecular scale. It is much smaller than the human cell.

The nanometre is also used to talk about wavelength and electromagnetic radiation, particularly the visible spectre of 400 - 800 nm.

How crystal bowls are coloured

The basis for such bowls are clear and transparent. First, nanoparticles make them coloured in the process of tempering, thanks to transition metal ions, silver (Ag) in this case. To get a clear colour it is necessary to make the ions in an aggregate move faster. The ionic exchange means here the substitute of quartz ions with silver ones.

Colouring by ionic exchange with silver is based on a number of processes in nanotechnology. First, silver ions are inserted into the quartz matrix, then aggregated and, finally, formed into metallic nanoparticles in the same quartz.

This technology is complex and hybrid, as it draws on classical physics and quantum theories. Also, it makes use of the theory of crystalline field which describes electronic structure of transition metal complexes.

While metallic ions are receiving light, they are absorbing an amount of energy transported by photons (particles of light). This provokes electron excitation of their surface layer. These electrons evolve from basic energy into superior energy level. Due to discrepancies between energetic levels, an ion absorbs some frequency of the received light, which results in emitting a complementary colour.

The colours owe their unchangeable nature to the process of their fabrication. Once silver is embedded into the matrix of the crystal bowl, it undergoes the procedure of immersion in aqua regia (a mixture of nitric acid and hydrochloric acid used to dissolve noble metals). Next, metal distributes itself homogeneously in the mixture during the heating which allows silver atoms to move freely in the quartz. While they are speeding up, they are hitting and sticking to one another. This is the stage of crystalline growth which gradually results in forming hundreds or even thousands of metallic atoms!

How we get such precise blend of colours

The size of a metallic aggregate influences the colour. Look more closely at their structures and optical properties.

We observe here not only atomic absorption of light (by metallic atoms or metallic ions), but also a very interesting optical absorption by the whole aggregate. This is based on two concurrent phenomena:

As regards the metal, even at an infinitely tiny scale: metal absorbs light through inter-bands (between the valence band and the conduction band). This happens at the far-infrared wavelength, i.e. ultraviolet (from 10 to 400 nm).

As regards very small aggregates: the crucial thing is the number of atoms on the surface in relation to the number of interior atoms. The surface atoms combined with free electrons form a sort of gas which can resonate with all magnetic radiation, in this case with light, and produces what we call “the plasmon resonance”.

We owe such beautiful colours to the cooperation of chemists and physicists. That cooperation, thanks to research in the field of the structure of matter at a nanometric scale, has already revolutionized glass industry for example.

These days this technological breakthrough changes the manufacturing of rock crystal crucibles into modern industry and combines high technology with craft.

Modern and inspiring technology in the service of creativity and mankind… 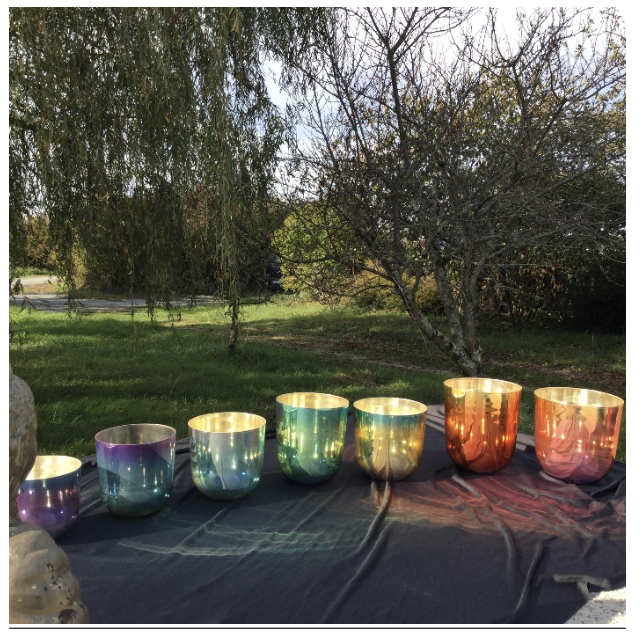 Playing a crystal bowl is not a musical activity, even though it may be associated with instruments. It can also be a part of a concert, a voyage or a vibratory massage.

1. Strengthen your sensual capacity and trust your internal guide to decide when, where and how much time you play the bowl. That is very intuitive and encourages us rather to discover the instrument itself in the first place and then follow our own needs.

2. Open up to the internal alchemy of the bowl, submitting to the process of physical, psychological and spiritual purification. To emit such crystalline waves means to gather powerful energy and transformation forces which encourage to challenge oneself.

3. Master your art of living through developing your consciousness, mastering self-control and making intent your direct inspiration in life.

Moreover, it also seems essential to learn how to play the bowl. Courses, workshops or other forms of education turn out to be useful to explore numerous ways of using the bowl in everyday life, for example:
- Raising your vibratory level according to your daily needs
- Revitalising water and preparing elixirs
- Liberating the self
- Bringing harmony and balance into your place of living
- Purification of stones and objects
- Accompanying rituals and ceremonies
- And many other usages which are found helpful in personal or professional contexts by the meditating, therapists, musicians or the initiated.

Various techniques are possible as far as the knocking and the singing sounds are concerned. The former is produced when a mallet is knocked against the rim of the bowl, the latter - when the mallet is rubbing the wall of the quartz vessel.

Ying and Yang equilibrium, the mild and the firm balance, precision and sensitivity are necessary not to “tear” the delicate body and respect the rhythms and cycles of this alchemic process.

Note that we can even plunge our crystal bowl in our bathtub or in the swimming pool to spread crystalline frequency in the liquid. In fact, sound circulates in water five times better than in the air.

Nevertheless, nothing beats uniting our own voice with the sound of the crystal bowl. This technique is inspired by syntony.

Tuning your voice in to the note of your quartz vessel enables you to sing in harmony with it, either chanting mantra psalms or humming the healing sounds. This Intent (the Word) is expanded 15000 times according to the Vedic texts which touch upon the power of rock crystal.

Moreover, you experience the feeling of perfect union of your voice, the sound and energy of the Universe.

Your body is fully activated around its singing axis to produce harmonic chant and the sounds are emitted from your own internal universe.

This technique requires only enough self-confidence to let your voice go and the connection with your own internal guide, then the sound adapted to a given situation is easily emitted.

Other instruments made of crystal

These days, when we experience the first signals of crystal era, it is possible to find a satisfactory variation of an instrument made of quartz.

The form of such instruments determines their particular waves and thus implies various usages.

The first of them is the diapason. We usually use metal diapasons matched with organs and their frequency. Nowadays, one diapason made of quartz covers the quantum field of possibilities to process directly the density of the matter.

The harp or the xylophone made of crystal have found their place in the world of subtle frequencies, i.e. in harmonic compositions of 8 basic notes of the 440 Hz or 432 Hz frequencies.

The sacred geometry is used in the creation of vibratory instruments to make vibration of crystal frequency. Galactic sounds emitted by pyramids or holons evoke multidimensional states of mind. 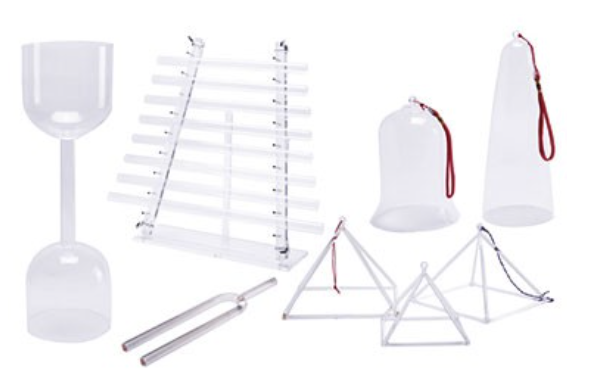 Bells, didgeridoos made of quartz are available in shops selling rare instruments made by people with passion for crystal.

Crystal era – it is now!